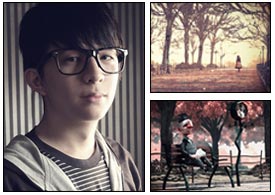 He describes himself as expressive, artistic, thinker.. Graduated from Binus School of Design majoring Animation in 2012.

Moriendo is a short 3D animation is adapted from a short story titled A Morning and A Dead Man. Departing from the monotonous’s theme in a in general and animation in particular, Moriendo tries to present a short animation visual style and unusual story. Moreover, in this short animation, I tried to collaborate the animated story with artistic literature. Moriendo derived from the Latin, “Moriendo Renascor” meaning in his death, I am alive again. Moriendo tells of meeting a woman who felt her life was empty with an angel of death in a shape of an old man. The encounter ended in unthinkable conditions and change the way they live.