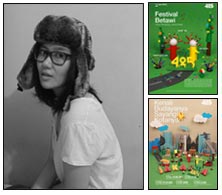 She describes herself as craft, quirk, timeless.. Graduated from Binus School of Design majoring New Media in 2012.

The anniversary of the Jakarta city’s 485 is one of the biggest event.

Using the concept of tactile, visual form which all produced a result that resembles a folded paper icons of the city, as well as including the various typical celebrations for the city’s birthday took place. With festive and imaginative theme, which met with a fresh concept, this should be something that is memorable and has its own charm.

Any idea that the city bustle and never out of congestion, pollution and the gray color typical of Jakarta replaced with a simplified icons of the city, and the use of cheerful colors visually pampering.

Media promotion digunakaan in this event including logos, posters, flyers, stop motion, video, event guide, print ads in magazines, ads in Transjakarta, stickers, and more. Media selection is considered to be effective, accordance with the concept of the intended target audience. The purpose of this campaign is the concept of giving the city a memorable and unforgettable anniversary.